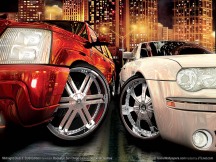 I’ve never done it in real life, because I like not being in jail/dead. But, in a video game, I can’t get enough. I discovered this hidden love while playing Midnight Club 3. I had stayed away from racing games in the past, as the ultra-realistic Gran Turismo never interested me. But tearing up the city street in my customized car? Count me in!!

I’m branching out now, trying Need For Speed and Burnout. The latter isn’t all I wish it was. It’s fun to crash cars, but I get bored with the game after a couple weeks. All the same, I’m thinking bout getting Paradise for Xbox360.

I’ve heard good things about the Need For Speed series, often from people I would never expect to love a racing game. It’s taken me until Carbon to get around to playing it. It was one of my first games for Wii, but I was never comfortable with the controls. Now that I have it for Xbox, I’m enjoying the game much more.

One thing in particular that I dislike about Need For Speed is their forced narrative. I don’t remember any narrative for Burnout. What narrative is needed? Drive. Crash. Repeat. I’m sold. There was a small storyline in Midnight Club, but you could skip it if you want and it just helped to transition between different racing events, cities, and explain unlocked content. NFS wants you to be a part of the story. You’ve got a history with this girl, you left town quick, etc. I understand that they are trying to integrate this racing into a greater narrative. However, your driving doesn’t seem to affect or enrich the narrative. Though it should make the story more interesting or engaging, the mid-scene driving is tedious.

I don’t blame them for this interruption method of story telling. The same technique in literature too. It’s called “in media res” and at it’s best, it sucks the reader in, eager for details. At it’s worse, it’s confusing, generic and uninformative; it detaches the reader instead of piquing their interest. My many hours with Midnight Club make the races easy. To someone new to the genre, it would be frustrating to fail these mini races and be unable to advance the unnecessary plot.

This distraction doesn’t keep me from loving the game. I initially hated the crew member feature, which forces you to team up during races. Then, my teammate won after I was demolished by other cars, and it saved me from restarting the race. Now my feelings are neutral, as the scout often stops or swerves in front of me.

The game play is easier than Midnight Club. It’s easier to stay on course and the wide streets are an advantage as well. However, the multiple types of races (Sprint, Speed Trap, Drift, etc.) offer more variety than MC3. You also aren’t forced to complete every race in order to advance (something that MC has adapted for their upcoming Los Angeles).

One downside to NFS is the styling. I hate the mercury glow of everything (including the people) in the videos. And there’s something else about the sheen of the races that bothers me. The real issue here is probably my overwhelming love for Midnight Club, but I digress.

This post rambled a little, so in summary: I love racing and I don’t need a storyline.