The best gaming thing that I’ve done this year, by far, is Dovahfest: a weekend long Skyrim playing party. The idea spawned because our non-gamer friend from Gamenight started playing Skyrim (to our amazement). I invited a friend who lived out of town, who admitted upon arrival that he didn’t really know what to expect for something called “Dovahfest”. He thought perhaps we were playing and taking turns, or doing other dragon related activities like watching movies with dragons. He said he thought to himself, “Well, there’s no way they are just putting up a wall of TVs and each playing Skyrim.”

But that’s exactly what we did. 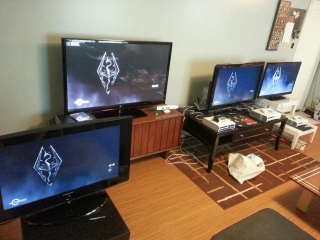 We already had two TVs and had planned to buy a third anyway, so Dovahfest was our excuse to get it. Our friends brought their TV and Xbox. We borrowed a fourth Xbox from my cousin, bought one extra copy of Skyrim and rented another from Redbox. As you can tell by the wall of TVs, we re-arranged our furniture on the other wall, blocking the back door to create a wall of couches.

We were ready to kill some dragons. 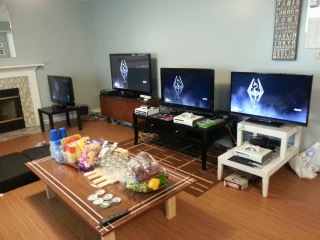 Of course, we had lots of food for the weekend. Most of it was something you could hypothetically find in Skyrim. Among our spread was jerky, shepard’s pie, fruit, cheese, and sweetrolls. We also had a couple mead and beer flights. I sorta drank mine before I could be bothered to take a picture. 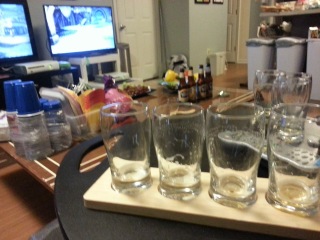 The mead glasses were also used for our potions flights.From left to right, the potions were poison, health, stamina, and magic. 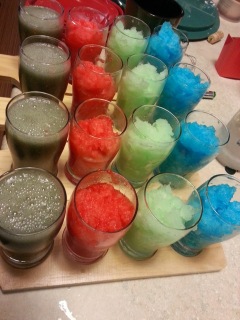 All the potions were made with jello, following the sparkling ice recipe. The poison one also contained vodka and blended berries, which gave it a perfectly poisonous color. I think the health potions were strawberry, the stamina potions were melon, and the magic potions were mixed berry.

There would be more pictures from Dovahfest, but we were rather busy playing. It was surprisingly helpful to have other people playing in the same room. We compared finished missions, words of power, and our gear. Honestly, If I had the space and the money, I would set up a gamer den with multiple TVs so that hosting such parties would be possible anytime.

Edit: I forgot! Here’s the chalkboard on the side of our kitchen cabinet, onto which I wrote out the Song of the Dragonborn. The title is in dragon script, the top half has the song in dragon language and the bottom is the same song translated into English. Writing all this took longer than it should have, and for that reason it is still on the chalkboard today. Good times! 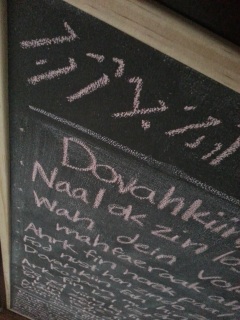 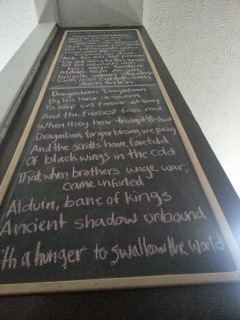