Way back in 2009, before the advent of Tabletop, we attempted to start a Friday night bible study with a couple friends that quickly devolved into Gamenight. We eat, drink, and play board games: usually pensive, Germanic, dominate-everyone type things. I might get it together enough to have a reoccuring post about these nights, but for now here are pictures from a few of our favorite games. 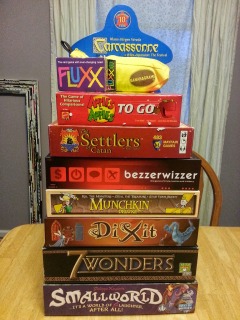 This is the stack we took for a weekend away with our Gamenight friends: Carcassone, Fluxx, Bananagrams, Apples to Apples, Settlers of Catan, Bezzerwizzer, Munchkin, Dixit, 7 Wonders, and Smallworld. 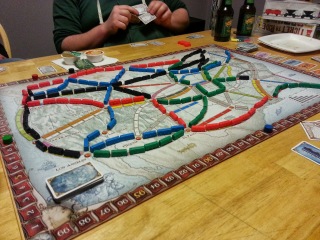 A Gamenight favorite that wasn’t mentioned above is being played here: Ticket to Ride. Everyone gets a certain color of trains and tickets for city to city routes. Everyone tries to connect the cities on their route, earning points as you fill the outlined paths with your trains. At the end of the game, you add or subtract points from your tickets, depending on whether you completed the route or not. 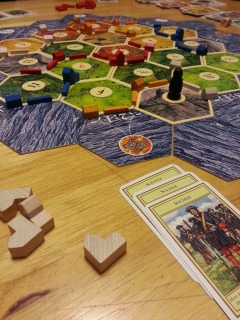 Settlers of Catan was our introduction to next-level board games. It’s tricky to explain, so I will do a mediocre job: You are trying to settle the lands of Catan. There’s trade, development cards, settlements, cities, roads, a soldier… many things. It’s fun, though my husband often angrily declares at the beginning of the game that someone has destroyed his chances to win. Of course, he jsut wins anyways. 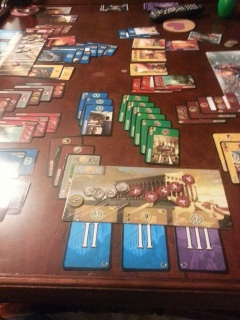 7 Wonders requires a fair bit of space, as it comes with many cards that need to stay visible throughout the game. Everyone gets a large card with one of the seven wonders of the world. The game has three eras, during which your civilization advances and attempts to complete construction. You have money, resources, military, etc. It’s a little like Settlers of Catan, but you don’t have to worry about a map. Because the scoring at the end of the game can be tricky, I recommend using a 7 Wonders scoring app instead of tallying it up by hand. 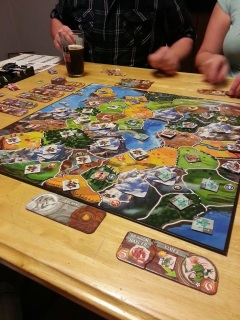 Small World is another frequent choice at Gamenight. The map is similar to Catan, but you play with different races instead of roads and buildings. Each of the races has a special power which gives them a certain advantage. On your turn you try to conquer as many adjacent lands as possible, collecting points at the end of each turn. The person with the most points at the end wins! 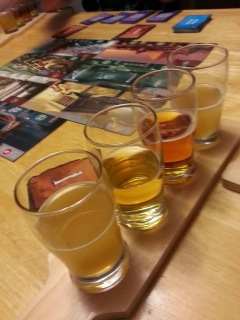 Oh yeah, and the drinking! The beer flight glasses first used for Dovahfest have made subsequent appearances at Gamenight. We used to buy a sampler pack and just drink out of each other’s beers… so this is a definite step up.