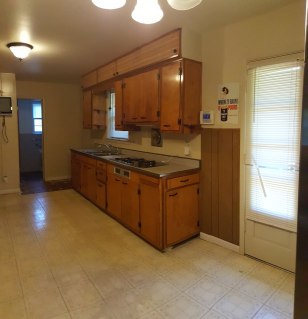 The Basement Flood caused our fridge to defrost, which curled our linoleum tile flooring. At this point I made the executive decision to renovate our kitchen (though I would later learn that the tiles dry flat and re-adhere themselves like magic).

Our plan was to remove the bathroom at the back of the kitchen, push out the wall and turn it into a butler’s pantry with a sink and our microwave. Then, we will add a dishwasher, standard range, and some extra cabinets.

To get started, we picked GE Artistry Series Appliances to respect the time period of the house.  We’re going with unfinished cabinets from Home Depot (which are always in stock at the store), and using a rustoleum kit again to finish them once they are hung.  We found a crazy cheap laminate that we are going to use until we want to invest in something more permanent. Finally, we rented a dumpster from Greenway Dumpsters, a local company that offers smaller-sized roll-off dumpsters.

Just before we started tearing down the bathroom wall, we had a change of heart and decided to hire a contractor. Because we could not take time off work to dedicate to the project, we were worried our timeline would stretch beyond our comfort zone. Unlike an office or spare bedroom, this wasn’t something we could put off mid-project. We wanted to ensure it was done well, and were confident that we would have 100% return on anything we spent on our 60 year old kitchen.

The contractors found two surprises: Our walls were a drywall / plaster hybrid, and there was a cast iron vent stack running through the wall we wanted to remove. We decided to leave the wall where it was, and just update our plans on the fly. Matching the drywall to the plaster hybrid took a lot of extra coats of compound, which pushed the contractors from finishing on Thursday to the next Tuesday.

We installed the cabinets from the pantry to the stove, and installed the sink and countertop. We messed up the countertop a bit on the install, but we intend to replace it with some kind of solid surface in the future. When the plumber came back to install the vent under the sink, we decided to pay him to finish connecting the drains and installing the appliances. This was work we could have done ourselves, but it had been 12 days without a kitchen, and our one bathroom sink was backed up. With so much work ahead of us, we decided it was better to get this knocked out before the weekend.

We only have about 1/4 of the kitchen done, but that includes the range, sink, and dishwasher. We’re taking a short break to catch up on other housework before starting Phase 2